For this 3 day, 2 night summer backpacking trip, I’ll be hiking a 30 mile backpacking loop in New Hampshire’s White Mountain National Forest.  I call this the Presicat loop because it’s comprised of the Carter Range and Wildcat Range on one side, and the northern section of the Presidential Range on the other.

This route creates a grand tour of the northern White Mountains with a section of the Appalachian Trail and Mt Washington as it’s centerpiece.  Along the way we’ll hit 9 major summits (NH48’s) and 8 subsidiary peaks, while racking up 15,228 feet of elevation gain on some pretty rugged trails.

For sleep and shelter I chose a minimalist ultralight hammock camping system. This allowed me to get my base weight down to 9 lb.  Notable gear can be found in the gear section below. Or check out my full printable list with weights and links on LighterPack. 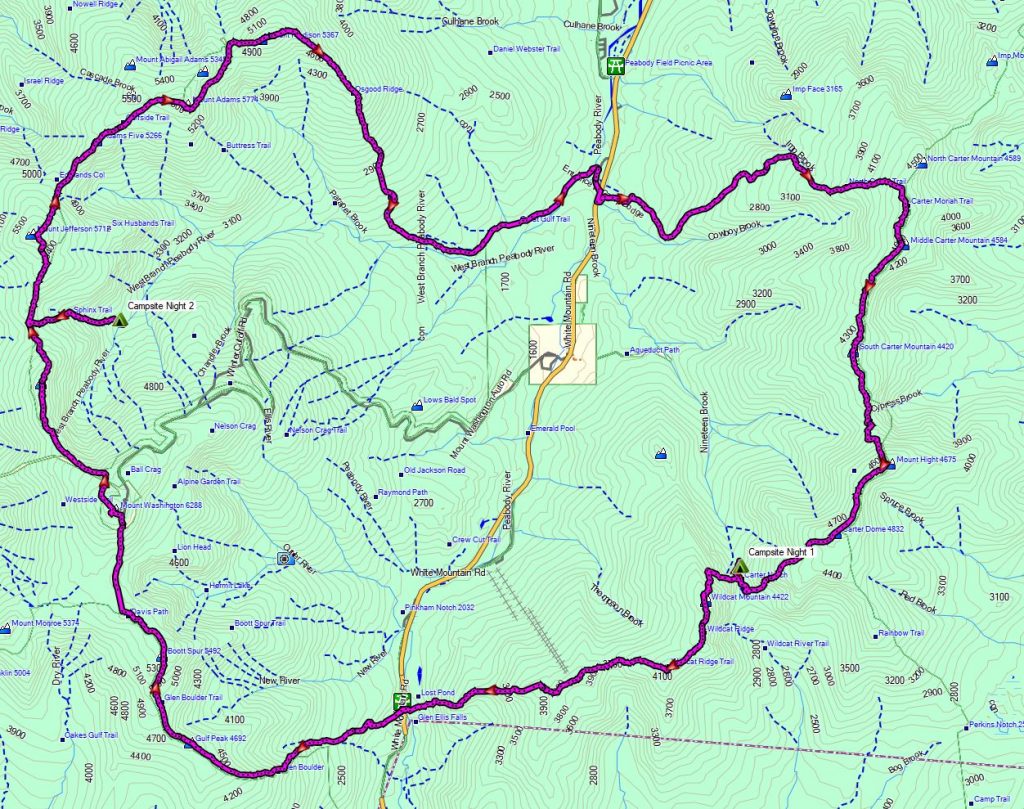 No permit is required to camp in the White Mountains, but the trailhead I chose did require a self payment of $3 per day. Rules and regulations regarding backcountry camping can be found on the USFS website here.

Full GPS track data, including campsites, water sources, etc, for this trip and many others can be downloaded on my Trip Data Page.

END_OF_DOCUMENT_TOKEN_TO_BE_REPLACED

Tips, Gear Used, & Things I Could Have Done Differently while Climbing Mt Washington in Winter.

Join TJ & I for 3 days of hiking, camping & backpacking in New Hampshire’s Great Gulf Wilderness.  Oh, & I also fall on my face.

For this adventure, we’ll be revisiting an attempt at a hike that I originally did as a solo backpacking trip a few years back.  A rather aggressive loop, chalking up 30+ miles and over 15,000 feet gross elevation gain, the plan was to give it another go while giving TJ an ultimate sampler platter of the White Mountains.  As fate would have it, things would corkscrew towards another outcome… Full GPS track data and waypoints for various POI’s on this trip are available for download on the Trip Data Page. Join me as I attempt a winter ascent of Mt Washington, while hammock camping in the Huntington Ravine.

For this trip, I’ll be heading up to the White Mountains for one more winter backpacking trip before the season ends, and spring arrives.  This will also be my first attempt to climb Mt Washington in winter.  Okay, climb may be a bit overzealous of a term, but it will be pretty aggressive compared to my other winter hikes.  Which brings up an important topic – additional gear needed.  I’ll get to that a little later, but first lets take a look at where exactly I started off from and the general route I took.  Full GPS track data for this trip can be downloaded on the Trip Data page.

There were a couple of nice things about parking at Pinkham Notch Visitor Center.  First, there was no parking fee, so that’s always nice.  They also leave the pack room, bathrooms and changing area open 24 hours, which I was quite happy to discover upon my arrival at 2 AM.

There were two pieces of gear that I brought on this trip, that I’ve never previously felt the need for on other White Mountains winter trips:  Crampons and an ice axe.

The ice axe is not to be confused with an ice tool, specialized for actual ice climbing, supported by ropes and typically headed straight up a wall of ice.  The ice as, or mountaineering axe as it’s also often called, is longer and straight with a pick for self arresting on one side (this is the primary reason to bring it out on the ice fields of Mt Washington), and an adze on the other side for digging and chopping tasks.  The adze is mostly used for more advanced mountaineering techniques than may be required on a Mt Washington attempt, but it does come in handy around camp for setting up a home for the night.

The crampons I chose were universal strap-on crampons, so that I could use them with my regular, flexible winter hiking boots, as opposed to the typical Automatic or semi-auto crampons that require a traditional hard plastic climbing boot, which I do not own.  It should also be pointed out that my usual winter traction choice, Kahtoola MICROspikes, are not crampons, nor are they in anyway comparable.  I love my micro spikes, but if I had them as my only option on this trip, I probably would have been in some trouble.  Or at the very least, it would have taken me twice as long to complete the route.

As seen in the video, there are some other pieces of gear that are essential for a Mt Washington winter climb.  I should also reiterate that no matter how favorable the forecasted conditions are, you should always pack and carry worst case winter gear.  This includes the ability to have all skin fully covered, no exceptions!  Conditions can change on a dime in the Whites.  Below are some highlights of gear I brought for the above treeline portion of my hike (other gear was left at my base camp below treeline).

Clothing worn was pretty much exactly what I’ve used on my previous White Mountains snow camping trips.  I cover some of the details later in the video as well.  You’ll also notice that I do not have snowshoes listed on my above treeline list.  I brought a pair of MSR Denali Ascent snowshoes that I left at my base camp, and in fact, that was the only place that they were necessary.  I did not find them to be need on the wind blown, ice covered summit cone of Mt Washington – crampons took care of that nicely.  The section of Tuckerman Ravine trail approaching Harvard Cabin traversed daily via snowmobile by rangers checking avalanche conditions, so I really didn’t need snowshoes on that portion of the hike as well.  A few steps off the trail though, and you’ll quickly find yourself in waist deep snow or more.

Post-Hike Burger for this Trip 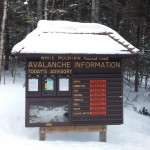 The Huntington Ravine Avalanche Info Board 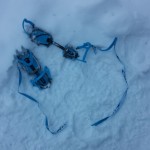 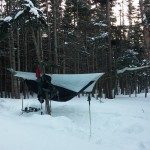 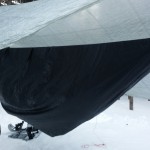 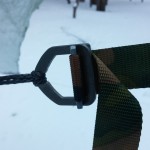 Close up Look at the Dutch Titanium Cinch Buckle 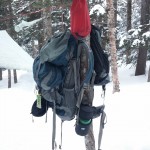 A Tree Full of Gear 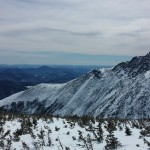 Looking down into Tuckerman Ravine 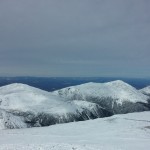 A Sweeping View from the Mt Washington Observation Deck 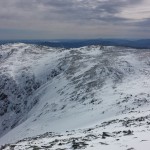 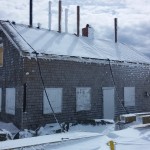 Chains Holding Down one of the Summit Buildings 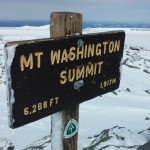 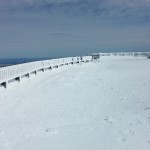 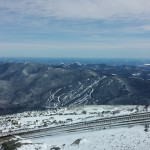 A View of the Wildcat Range, with Cog Railroad Track in Foreground 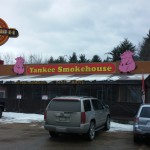 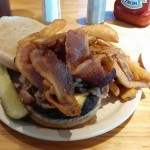 A Glorious Post-Hike Cheeseburger, Covered in Bacon and Smoked Pork 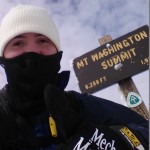